Art project "The Mental Game" took place in Poznan, Poland, 1-16 October 2016 in  the Gallery MONA Iner spaces. An interdisciplinary collective exhibition of Ukrainian artists.
The project was implemented within the framework of the accompanying programme 5 Mediations Biennale 2016 in Poznan, Poland.

8 young artist, participating in the exhibition, come from various Ukrainian cities. They will show works tackling the topic of Mental Game. Their works are done in contemporary media such as video, sound installation and interactive installation, performance.

Project Idea:
Mentality – a concept which refers to convictions, attitudes, opinions, a way of thinking featured by a social group (a nation), or espoused by an individual. Mentality is influenced by social, cultural and biological factors.
A general system of principles, which is used by an individual, or a collective to determine their perception, feelings, value system and reaction to social life, is often unconscious. Mentality is being built on social norms present within a given group (wikipedia).
Ukraine is a country, which not so long ago used to be part of The USSR, and it represented an element of a large MYTH. Today, Ukraine suffers from bloated myths and pseudo-history. People have been faced with a moral choice between accepting the system and fighting it for 25 years. "We are in constant search for…values". 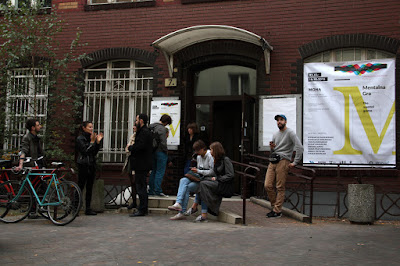 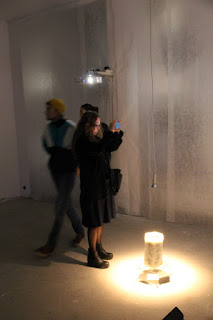 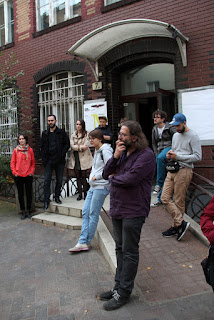 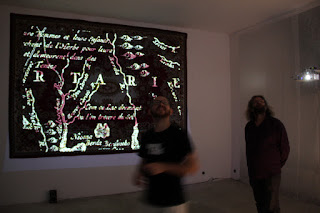 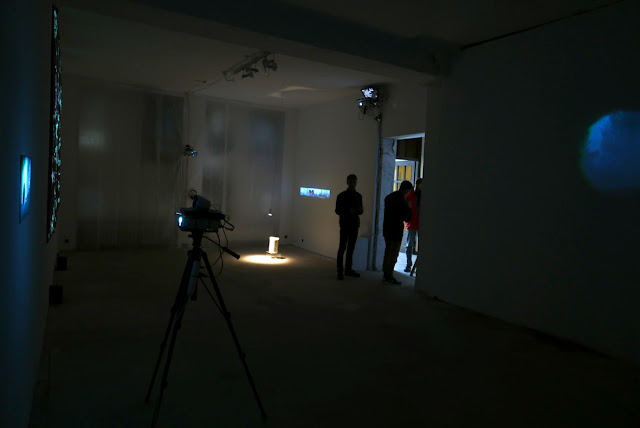 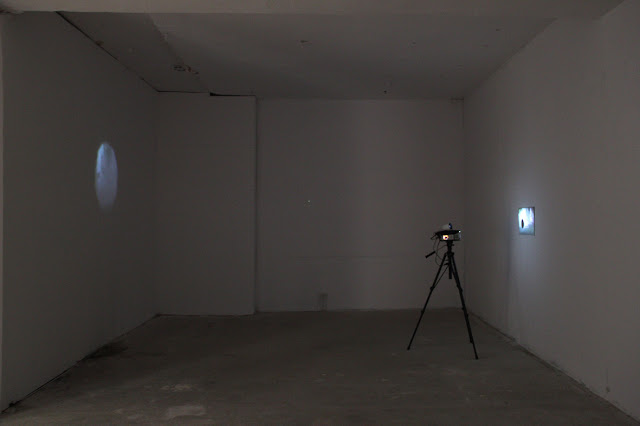 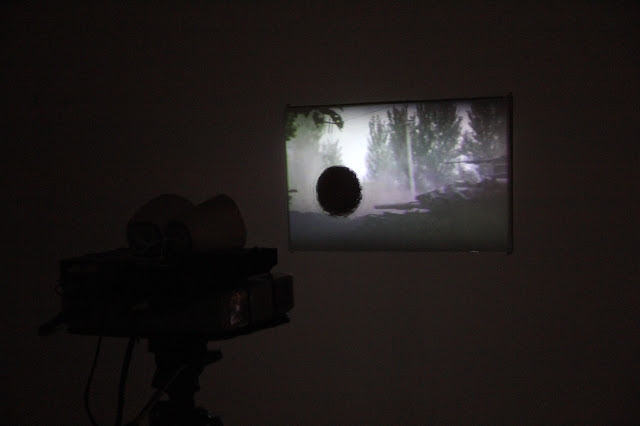 Vitalii Shupliak "The loop of history"
Video installation, 2016
The work consists of a tripod on top of which there is a projector mounted to a dirty mirror. The mirror has got a round rubbed out spot, there is also a reflection of a video fragment projected on the opposite wall. The projection shows a video documentation of a tank launching a rocket in Donbas region. It clearly documents the settling of dust and smoke after the launch. This fragment has been edited and prolonged. It takes 5 minutes to watch. As a result, the method of image representation is divided into two parts: one: on a dirty surface of the mirror (the tank, a part of a trench and landscape), and two: the image is reflected by clear parts of the mirror, and it shines on the wall opposite (part of the landscape, trees and sky). On the wall, there is a drawing of trees before the launch, it matches the projected image. After the launch, the image of the tree remains, but it is moved. With time, the trees return to their original contour and the image evokes a moment of peace. The video is accompanied every 7 minutes by a loud shot. The work refers to a situation of permanent repetition of dramatic events in time when after a violent explosion there is a long period of emotional-informative settling of dust. What follows is the moment of peace and short-lived silence. 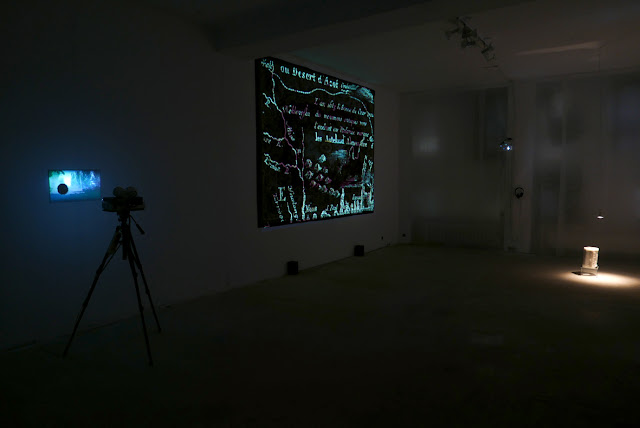 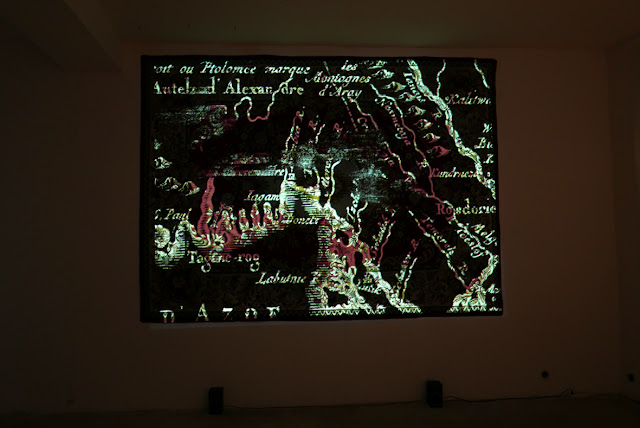 Anton Lapov "Desertum Asoviense / Study of Identity #3"
Interaсtive audiovisual installation, 2014
This work dedicated to semi-mythic geographical construct ´Desertum Asoviense (from Latin - "Asov Desert"), that delineates way of searching of "Les Cadres sociaux de la memoire" ("Frameworks of social memory" - after Maurice Halbwachs) in context of problematic of cultural-historical transmissions and mental geography of East-Southern regions of modern Ukraine.
Dialog between digital media and archaic objectness of eastern carpet build upon interactive multiplication of cartographic image and spatial sound space. In this case, maze of personal author's identification constrained by outlines of twists of intuitive memory that emerged from the deep of collective amnesia. Visitors invites for this dia/polylog; their moves caused qualitative and/or entropic changes in audiovisual semantic structure of installation. 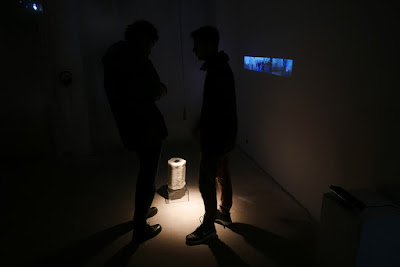 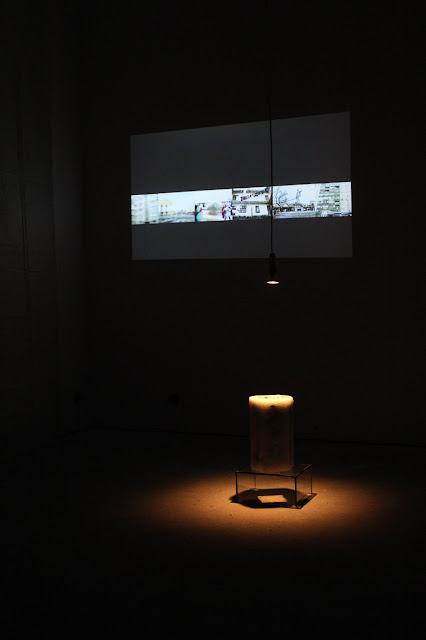 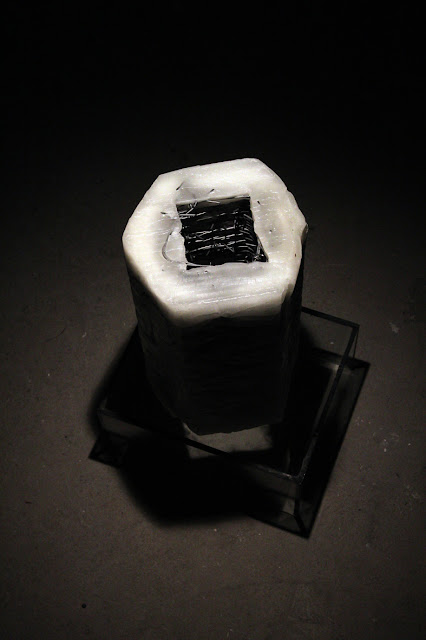 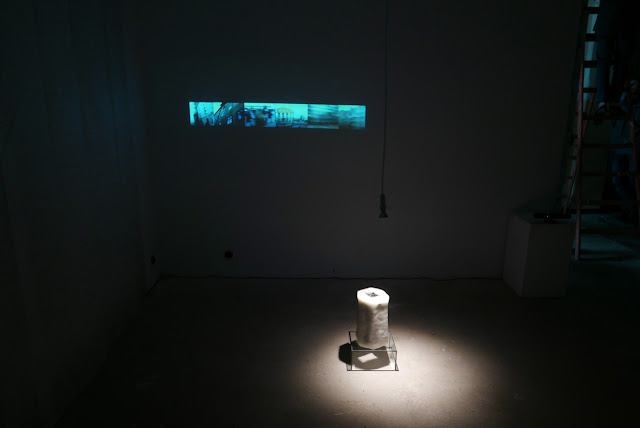 Mykhaylo Barabash "Law of urban gravity"
Video, object, 2014
These are reflections on the theme oh human’s existence in a city space. A city as a specific environment which has a great influence on a human being. A world of an individual or a separate object as a unique item, which is closed system who lives by his own life from one hand but cooperates with environment from the other hand.
In this case, the environment is limitative. A city is shown as a factor of unlimited possibilities, but at the same time as one of the factors of dependence, leveling a human’s originality and uniqueness. 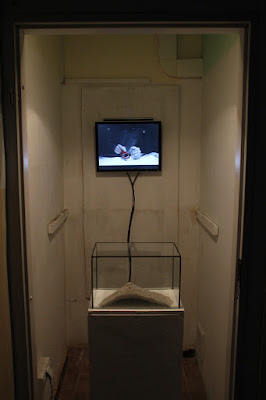 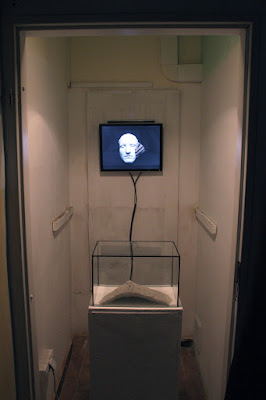 Video, 2014
Mode destroys personality. Methodical, monotonous work. Sound resembling the sawmill. Violence against itself to complete disappearance. Erasing human into dust. Each produced action leaves behind a trail. Disappearing the material object produces something more -memories, the memory of itself. The main objective of the work is to show that it is impossible to completely destroy a person. Dust becomes ashes ,the bearer of information, media, memory. 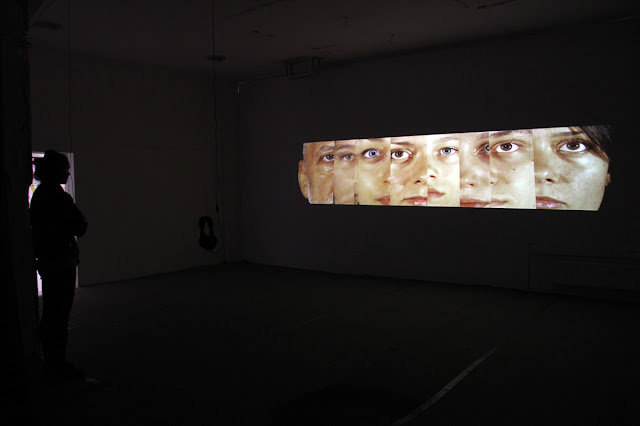 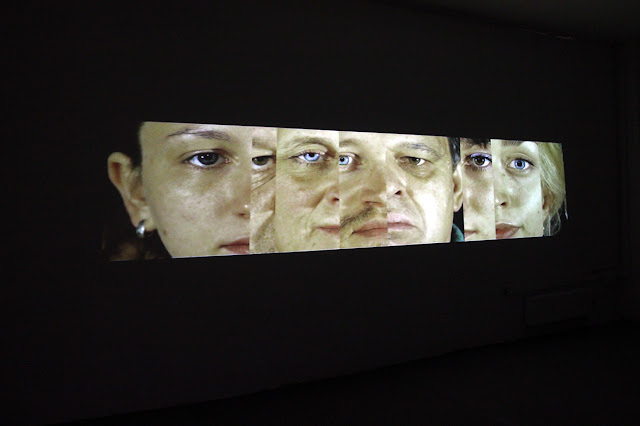 Sergiy Petlyuk "Live Landskape"
2-channel video installation, 2013
These projects are about the constant interaction between the city and a person as constant transformation of boundaries: personal,psychological, cultural, geographical, economic etc.. In these projects the city is shown as a source of permanent and irreversible changesthat affect everyone. At the same time these projects appeal personally to every person as an elementary particle of urbanization process,each of which influences on the life, development and understanding of the city. 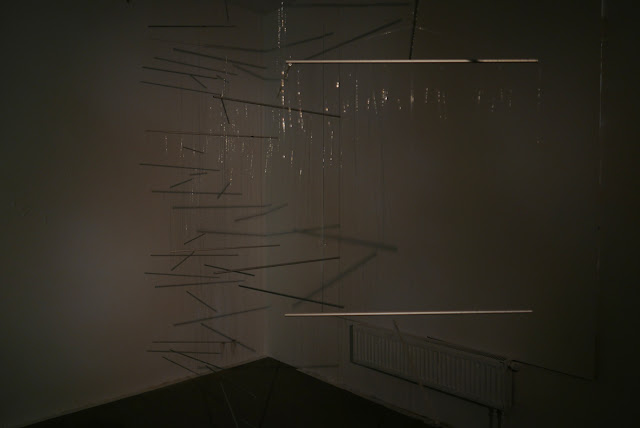 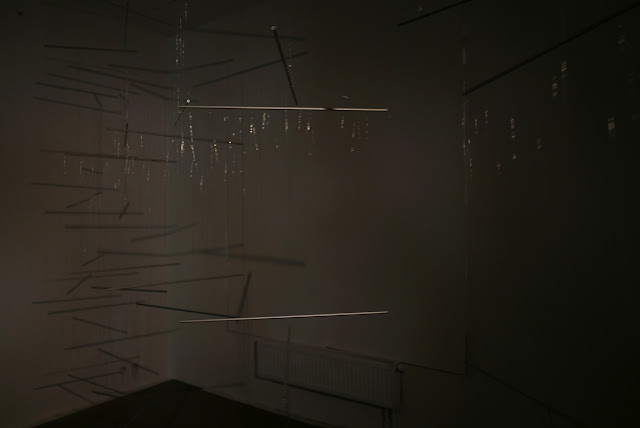 Tereza Barabash, Ostap Manulyak "The Wall"
Audiovisual installation, 2016
The object consists of 25 moving elements – aluminium pipes, strained veins, which create barriers / nominal obstacles.
The concept of The Wall refers to an illusionary aspect of various obstacles. They all belong to our choices. The wall stops movement… even mobile and delicate, when it is moving, it resembles a living organism. Although it is translucent, on a verge of visibility, it shines with sharpness of light and sound, it plays with senses. An artificial work of human attacks the conventions of habit, restrains the space, it threatens.
Text Ewa Pasternak-Kapera (© 2016 by Messier42 current art.space) 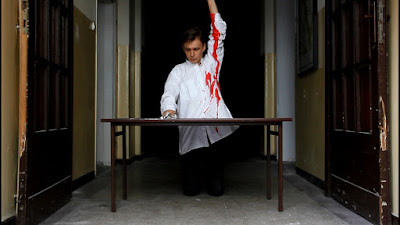 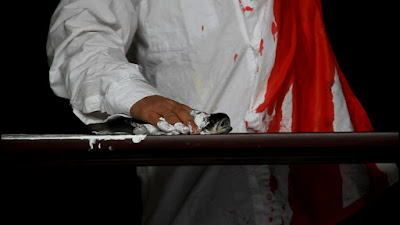